On January 15, 1972, Shirley Chisholm, Democratic member of Congress from New York’s Twelfth District, announced her candidacy for President of the United States – the first African-American woman to seek the nation’s highest office.

Women and blacks had previously run for president on minor party tickets — Sen. Margaret Chase Smith from Maine had campaigned for the Republican Party’s nomination in 1964 — but Chisholm’s candidacy was a double first in the history of the Democratic party and American politics.

A former schoolteacher from Brooklyn, Chisholm became an outspoken advocate of equal rights for women and minorities, a tireless supporter of programs that brought opportunity for the poor and disenfranchised.  In 1964 she was elected to the New York State Assembly, where she successfully pushed through bills that provided assistance for poor students to go to college, to provide employment insurance coverage for domestic employees, and to reverse a law that caused female teachers to lose their tenure while out on maternity leave.

She was elected to the U.S. House of Representatives in 1969 – the first black woman elected to Congress — where she continued her fight for equality and opportunity for women and minorities.   She was a forceful opponent of the War in Vietnam, arguing that the vast sums of money expended in the contracted conflict would be better spent at home, helping the poor and the hungry, providing education and adequate housing, supporting the idea that the impoverished could escape their debilitating conditions not just by government aid, but by encouraging self-effort.

“I was the first American citizen to be elected to Congress in spite of the double drawbacks of being female and having skin darkened by melanin,” Chisholm said.  “When you put it that way, it sounds like a foolish reason for fame. In a just and free society it would be foolish. That I am a national figure because I was the first person in 192 years to be at once a congressman, black and a woman proves, I think, that our society is not yet either just or free.”

Seeking a larger platform for her views, Chisholm decided in 1972 to run for President of the United States on the Democratic ticket.  “My greatest political asset, which professional politicians fear, is my mouth, out of which come all kinds of things one shouldn’t always discuss for reasons of political expediency,” Chisolm noted.  Hers was a grassroots movement –- she raised barely $300,000 for her campaign, and won only 152 delegates before she withdrew.  She knew her chances of securing the nomination were nearly nonexistent. But her voice was heard.  In particular, she became an outspoken yet forceful proponent of women’s rights.  “Of my two ‘handicaps,’ being female put more obstacles in my path than being black,” Chisolm said.  “One distressing thing is the way men react to women who assert their equality: their ultimate weapon is to call them unfeminine. They think she is anti-male; they even whisper that she’s probably a lesbian.”

After her failed run for the presidency, Chisholm continued to serve in Congress, finally retiring in 1983.  In reflecting on her distinguished career in politics, Chisholm said, “I want history to remember me not just as the first black woman to be elected to Congress, not as the first black woman to have made a bid for the presidency of the United States, but as a black woman who lived in the 20th century and dared to be herself.” 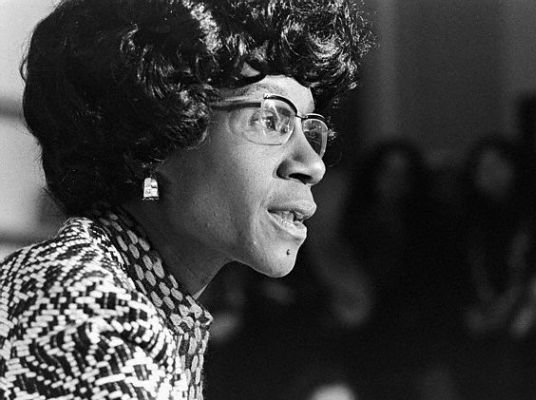 Writer, historian, creative director, poet, playwright, author of nine books and nearly 200 essays and articles exploring a broad range of American social, cultural and historical topics.
View all posts by markwalston »
« The Bombing of the US Pentagon
1972: The Longest Year in History »