In July 1972 Queen Elizabeth II officially opened the Runcorn Shopping Center, the first “American-style” shopping center built in the United Kingdom.  Today known as Halton Lea, it is what 1970s consumers in the United States called a “mall”  — a fully enclosed, weather-controlled wonder of commerce.  But the truly first American-style shopping center appeared with the Model T — the automobile-oriented shopping strip, small affairs of four or five connected shops but which by the 1930s had matured into long, undulating Art Deco fantasies with streamlined facades, jutting aluminum trimmed corners proudly mocking the prows of ocean liners, white and black tile courses stretched above a sea of plate glass and neon signs blazing away.

For the next thirty years real estate moguls and commercial developers continued to erect strip shopping centers — or ribbon centers as they were sometimes euphemistically called, a pretty name for what increasingly were great blobs in the streetscape, built of cheap brick or extruded concrete, mutating into monstrosities that oozed like leprous sores along all the major routes in and out of the city.

The more successful centers followed a strict marketing formula, with a big name store as the magnet, maybe a J.C. Penney’s or a Safeway grocery store, joined by a coterie of second-tier name brands — a True Value hardware or a Baskin-Robbins ice cream store – and the remaining spaces given over to a rotating cast of local entrepreneurs with dreams of making a good living from their Christmas Spirit Shoppe or Pampered Pooch or Designs by Jackie but inevitably hung the liquidation sale sign within a few years, only to be replaced by other starry-eyed entrepreneurs with hopes of commercial longevity but who, alas, would inevitably suffer the same fate as their predecessors.

And the owners of these shopping strips, these long, low masonry abominations on the tree-lined parkways of suburbia, tried every now and then to pretty up their aging facades with new canvas awnings and plastic flowers but it was just so much lipstick on a pig.  And by 1970, all the Chevelles and Regals and Tornados and Country Squire wagons were cruising right by those old strips centers, motoring even farther into suburbia to experience a whole new way of shopping — in a biosphere of American capitalism, that commercial wonderland known as “the mall.” Here, as Le Corbusier might call it, was a machine for selling, everything finely designed to enhance the sell-buy proposition.

From the outside, most malls were, well, — honestly? – hideous.  Style points are severely deducted for a building that looked like a frog being dissected by ninth grade biology students, a big main body of stores with arms and legs of service bays and loading docks but all its internal organs exposed, the heating ducts and cooling systems and electrical transformers and all manner of boxes and pipes rising from the roof and cables and wires and boxes hanging off the sides.  Just like a frog turned inside out.

But once you stepped inside, the frog turned into a prince of marketing, the most majestic shopping experience you could imagine, all cool cobblestone floors and marble walls and polished brass rails and potted palms and teak benches at every turn and brushed aluminum escalators and elevators to take you between the two floors and climate control that kept the captive atmosphere at a marvelous 72 degrees all year round, just like Tahiti.

And the stores, oh, the stores, every imaginable store the modern suburban shopper would desire, from tobacconists to chocolatiers, from men’s haberdasheries to women’s outfitters.  And unlike the strip centers with their unbroken parapets of concrete, where the only thing that distinguished one store from another was the sign above the front door — and even those signs carried a single bland typography across the length of the façade and then, to further homogenize its appearance, reduced the names of the stores to their generic categories, so it simply read bakery, flowers, liquor, deli — but at the mall, every shop had its own unique façade, matched to the personality and the clientele of the store, classical columns and pediments for fine home furnishings accessories, bronze panels and chrome pilasters for cutting-edge women’s fashions, barn wood siding and split shingles for the country crafts store.

The mall was exciting, it was connected, it looked like Main Street reborn and in rootless ahistorical suburbia it was a new town center for a community that never had one. It became the axis of life, around which all else revolved.  Where friends gathered.  Where deals were made.  Where lovers met.  Where meals were had and games were played and time was whiled away in incandescent reveries astride the teak benches beside the potted palms, accompanied by Musak renditions of Donovan’s Mellow Yellow. 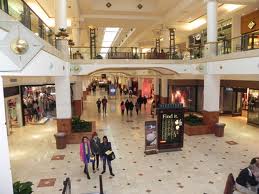