Charles Francis Jenkins and the Birth of TV

In 1929, inventor Charles Francis Jenkins built a small, unassuming bungalow at the corner of Windham Lane and Georgia Avenue in Wheaton, Maryland. From the outside, the property seemed a simple suburban house—except for the two, 125-foot steel towers rising from the yard.

Inside, something remarkable was happening: Engineers were busy in the home’s five rooms, electrifying the airwaves and sending out astonishing pictures from America’s first licensed television station.

A prolific inventor whose 400 patents presaged the future, from paper milk cartons to front-mounted automobile engines, Jenkins had come up with the idea or television years earlier. In 1913. he published a forward-thinking piece in the Motion Picture News titled “Motion Pictures by Wireless.” Over the next decade, he set about making that vision a reality.

In 1925 he transmitted a murky image of a small spinning windmill in Anacostia, D.C., to downtown Washington. Radio pioneer Lee DeForest was unimpressed at the time. “While theoretically and technically television may be feasible,” DeForest wrote the following year, “commercially and financially I consider it to be an impossibility, a development of which we need waste little time dreaming.”

Not to be discouraged, Jenkins enlisted the Amateur Radio Relay League in 1928 to fine-tune his invention. Club members modified their radios with a Jenkins-created device designed to receive moving pictures broadcast from Jenkins’ laboratory on Connecticut Avenue NW. Given the low bandwidth, those first efforts were no more than moving silhouettes, and local residents complained of interference with regular radio reception. But league members were enthusiastic. 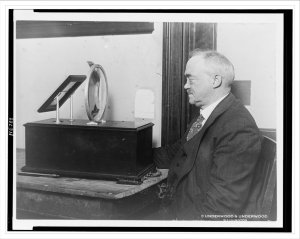 Seeking a less disruptive location where he could build a permanent station, Jenkins drove out Georgia Avenue one day and came to a high point of undeveloped land, just south of the crossroads village of Wheaton. There he built his bungalow and, armed with the first television license issued by the Federal Communications Commission, he began broadcasting from his new station, W3XK, in April 1929.

Soon his silhouette vignettes gave way to black-and-white images broadcast with greater definition, mostly short, light-hearted, live-action films. Television sets were sold to the public for $85 to $135—though they had to be attached to existing radio receivers. Motion pictures were broadcast on one wavelength, accompanying sound, on another. Viewers tuned into the two stations simultaneously and watched the shows projected from a mechanical spinning disc onto a six-inch square mirror.

Those early pictures were slow and murky. But “it will not be very long now,” Jenkins declared prophetically, “before one may see on a small white screen in one’s home notable current events, like inaugural ceremonies, ball games [and] pageants.”

In 1931, the Jenkins Television Corporation was sold to Lee DeForest—the original skeptic—to become DeForest-Jenkins. Eventually Jenkins’ mechanical system would be replaced by all-electronic systems. Industry growth was slow during the World War II years; by 1946, only 8,000 houses had TV sets. However, within a few years television would supplant radio as the dominant broadcast medium, with 45.7 million sets in use by 1960.

Writer, historian, creative director, poet, playwright, author of nine books and nearly 200 essays and articles exploring a broad range of American social, cultural and historical topics.
View all posts by markwalston »
« Hayes Manor and the Fall of the Reverend Alexander Williamson
First in the Field: Excerpt from a Speech Delivered at the Department of the Treasury by Mark Walston »