The Cold War during the 1950s and 60s elicited a range of American responses, from carefully planned, advanced technology defenses to primal paranoia. Washington was regarded as target zero for a communist incursion. Residents of Montgomery County waited in trepidation for the wail of the air raid siren; children practiced ducking under their desks; and a ring of Nike missile bases stretched across the county and around the city, ready to defend DC from aerial bombardment.

Chief among the fears of attack was the specter of what was then called “germ warfare,” where biological agents would be released into the air, water and food supplies, sickening huge swaths of the population. The weapons had been used since the dawn of recorded warfare; in the 6th century BC, the Assyrians would poison the wells of their enemies with a fungus that caused delirium. During World War II and the Korean War, army scientists sought to fully understand the effects of biological agents on the human body. But experimentation on animals brought uncertain results. Consequently, the army created a program that would employ the use of volunteers to test the effects of a variety of weaponized diseases. That program, begun in 1954, became known as Operation Whitecoat.

Three sites in the Washington, DC, area were selected to participate in the experiments: a main facility at Camp Detrick in Frederick, MD; the Water Reed hospital in DC; and what was known as the Annex at Forest Glen, a rambling installation in the woods north of Silver Spring, formerly a woman’s college but taken over by the government in 1942 under the War Powers Act. Originally the property – including dormitories and classrooms – was used for the convalescence and rehabilitation of soldiers. After the end of the Korean War, the facility became involved in experiments in germ warfare. 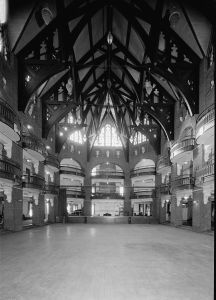 Operation Whitecoat volunteers were found in the followers of the Seventh-day Adventist church. Although willingly serving their country when drafted, their faith prohibited them from bearing arms. Consequently, many became medics. Now, the Army was offering the recruits the opportunity to serve their country in an entirely different way: as volunteers in biological testing.

The Seventh-day Adventist soldiers proved perfect subjects for the study: most were in excellent health, and none of them drank, smoked or used caffeine. Subjects were exposed to a variety of diseases in a contraption nicknamed “the Eight Ball,” a large spherical room where the subjects strapped on face masks and breathed in whatever was pumped in – sometimes just air, other times aerosols that contained pathogens that caused diseases such as Q fever and the plague. Treatments were then devised and tested; important new vaccines were discovered.

About 2,300 soldiers participated in the program, and although illness occurred, sometimes severe, official figures attribute no deaths to the experiments. The program ended in 1973, with the signing of the Biological and Toxin Weapons Convention, banning the “development, production and stockpiling of microbes or their poisonous products.” Today, the old Forest Glen Annex has been redeveloped into an upscale housing community.